Author Dan Pink has a new book out, When, his synthesis of research about timing in our lives. He makes reference to research on singing in a chorus (everyone doing something at exactly the same time). Some results suggest that its health benefits rival vigorous exercise.

I spent a little time trying to find the original data on this, and although I didn’t chase down the exact studies, I did find some interesting stuff. In a volume that rounds up recent research on music generally,  Music, Health, and Wellbeing, the chapter on choral singing points out that Renaissance composer William Byrd was a strong fan of singing for health.

An early reference to the idea that singing can be good for health and wellbeing is found in the writings of William Byrd (1543-1623). In the preface to his Psalmes, Sonets & songs [of sadnes and pietie], published in 1588, Byrd outlined eight reasons ‘to perswade every one to learne to sing’. Four of these reasons resonate with 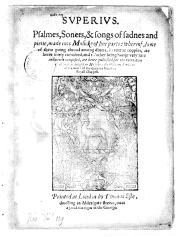 contemporary views on the ‘therapeutic’ benefits of singing. Singing, he asserted, helps to maintain health, by being ‘delightfull to Nature’ (i.e. giving pleasure and joy), by exercising the musculature of the chest, by expanding the lungs and by helping to reduce stammering and improve voice quality.

Byrd summed up his advocacy for singing in a well-known couplet:

Since singing is so good a thing,
I wish all men would learne to sing.

Remarkably, it is only now, over 400 years later, that scientific attention has begun to assess the merits of Byrd’s insights.

Everybody should learn to sing, although few do it with the elan of this gang, Voces8 in an arrangement of the folk song Shenandoah.