Seeing that Alan Bennett had a new play out and another touring sent me back to his mid-80s monologues, Talking Heads, which were originally written for the BBC and later performed as stage pieces (including at DC’s Studio Theater). Wonderful examples of giving an actor a deck of narrative cards and letting them turn them over one by one over the course of 40 or so minutes. The result reveals an arc that neither the audience nor the performer quite expected, often a quietly devastating report on the compromises and indignities of everyday life, and yet droll and funny.

The performances were also great–Bennett himself in one–and most memorably Maggie Smith as a vicar’s life in an Anglican parish in  A Bed Among the Lentils. It’s long, but worth watching the whole thing.

Took in Washington National Opera’s Candide, their season closer, and part of the celebration of the centenary of the maestro’s birth.

Been meaning to get down some things to say about it:  the show was the usual mixed bag, and the production’s ineptitude–despite good voices and some strong performances–failed to solve the abundant problems. Is it an opera, an operetta, or a musical? Should the winking parody style of the musical numbers (including Gilbert and Sullivan and Jeanette MacDonald & Nelson Eddy) be reflected in the production or underplayed? How do you deal with the picaresque narrative, which jumps continents and timeframes in its catalog of disasters with cinematic rather that stage logic? And most of all what to do about the fact that, at its core, it’s not a drama: it’s a satire that centers on a philosophical issue rather than a character-driven conflict (the key ingredient of almost all successful operas*). The protagonists,  without the directorial attention of a Mary Zimmermann, turn into very thinly drawn puppets. And even her musical comedy version was a bit like a revue (if winningly so).

That said, if anybody could have done a music-theater piece about an idea, perhaps it was Lenny. After all, He did write a violin concerto about a Platonic dialogue. But even he never seemed to be able to pull the threads together on Candide, and although I don’t regret taking in WNO’s as they did right by the intermittently wonderful score, the show never quite lives up to that wonderful fizzy overture, here conducted by the man himself.

Perhaps somebody should do a movie–the material might not fight the form so intensely.

*Strauss’ Capriccio is perhaps another example of an opera based on an idea “words vs. music” but it has better character development, and still has some problems in the theater.

I’m long, and gratefully, out of the arts reviewing game. (Despite an occasional lapse).

When I was doing it regularly,  an editor once told me my positive reviews were, atypically, better than my negative ones. Don’t know why, certainly for me the really bad review is a guilty pleasure, probably for others too. (Seems like it keeps Anthony Lane employed at the NYker. I’m not sure he honestly knows that much about movies, but the man knows how to pan a film.)

One of the great ‘left it for dead’ masters was John Simon of New York Magazine, who really let you know when he hadn’t liked something.

Here he is from 1987 on Andrew Lloyd Webber’s Starlight Express (the one with the roller skates). This is a piece, like Tom Shales interview of Phyllis George, that newspaper folk handed around to one another. Lodestones that point towards a not particularly admirable compass point, but point they do.

It would be best if children remained small,’ concludes Erich Kästner’s charming poem ‘A Mother Takes Stock.” This is even truer of model trains, which should not exceed the size of a small puppy and definitely should not be anthropomorphized as they are in the ghastly juggernaut of a musical from Britain, “Starlight Express.’

The conceit (in both senses of the word) is to put seeming adults on roller skates and make them pretend they are trains competing in a trans-America race imagined by a child, whose taped voice narrates the event. The repetitious preliminary heats and self-contradictory main races cannot be followed; the story is ludicrous and confused. Just when the trains veer into humanity, they become derailed into nonsense; just when the humanoids achieve some trainlikeness, they become choo choo cute.

Also immense and monstrous. The set—really an environment—is a huge, three-tiered track that winds across lowering and revolving bridges, around platforms that rise from a central declivity where most of the action takes place, and along winding paths that encircle two pockets of spectators but do not have the decency to envelop the entire audience (as they did in London) and thus at least occasionally be visible only on small TV monitors. Here the entire vertical three-ring circus is always in full, fulsome view, bespangled with garishly colored lights to put the brashest discotheque to shame, with characteristic bits of American cities from coast to blinking coast flaring up fitfully. And the often deafening sound is the most denatured, unnatural, dehumanized clangor ever to hit Broadway. Starting with that child, a mere computerized voice (the real boy, Braden Danner, has the good sense to be the live Gavroche up the street in ‘Les Misérables’), everything sounds canned. Hordes of performers whizzing about on skates have to be lip-synching, but even on the occasions when someone stands still long enough for a viva voce song, elephantine electronics make it all clank and clatter like a can tied to the Great Bear’s tail. [ARS: what would Simon make of today’s Broadway amplification?]

Witnessing ‘Starlight Express’ is to feel trapped inside a gargantuan tape deck while watching a Brobdingnagian Erector Set go through the most elaborate mechanical gyrations. The human performers railroaded into the show have to be actors, singers, dancers, roller skaters, and, considering the danger to life and limb, Evel Knievels, which is too much to expect of anybody, and so no one quite manages to huff and puff up to snuff.

The plot is simplemindedness itself. The insomniac child envisages a race through America for a shining silver dollar. There are trains from various countries, e.g., a Japanese bullet train, an Italian espresso (that’s the humor of it), etc., but the musical and dramatic possibilities of multinationality are promptly dropped as we concentrate on Rusty, a nice American steam engine that competes against a nasty American diesel called Greaseball and a campy, outer-space electric train, Electra, both of whom steal his pretty but fickle female tender, Pearl, as they try to trip and elbow him out of the race, sometimes using the services of the treacherous and androgynous Red Caboose, a cross between the Joker of ‘Jeu de cartes’ and Anybody’s from ‘West Side Story’—but, then, everything here is really from somewhere else.

Since the concept and music are by Andrew Lloyd Webber, who, as we know from ‘Cats,’ likes to go metaphysical on us, there is also God. Assuming the disembodied gospel-singing voice of Poppa, Rusty’s earthly father, this is the eponymous Starlight Express, appearing as a light show in the starry sky, who might as well be called I Am That I Amtrak. The mentality of the piece, as written by Lloyd Webber and his doggerelist Richard Stilgoe, is resolutely reactionary. Steam wins out over diesel and electricity (a curious position for a show that depends wholly on computers and state-of-the-nonart electronics), and women are neurotic or simpering tenders, sleepers, dining or smoking cars, the male locomotives’ subservient playthings or prostitutes (“I’m a sleeper with a heart of gold”) who, in a typical dance sequence, get kicked in the rear by Greaseball, for whom they bend over backward.

Lloyd Webber’s tunes are scavenged from all over, not least from Lloyd Webber, though here and there a patch of melody fleetingly pleases. Stilgoe’s lyrics tend toward things like “Was I corroded/Or overloaded?” “The coach I thought was going with me,/She up and joined electricity,” not to mention grating repetitions of “Freight/ Is great.” John Napier’s scenery and costumes here lean toward excess, as in “Cats,” but Meccano lovers should exult in them; David Hersey’s lighting just about twists itself inside out to come up with fancier effects (some compelling, some merely frantic), and the skating and break dancing by Arlene Phillips, though not up to what one sees in the streets outside the theater, has its moments. Trevor Nunn’s direction is pretty obvious here, and among the performers, only Reva Rice, Jane Krakowski, Greg Mowry, Steve Fowler, and Andrea McArdle come off passably [A few names that have continued in lights since then]—but, then, no one has much of a chance with an orchestra piped in from a “specially designed ‘orchestra room’ off stage” and very possibly on Mars.

“Starlight Express” is a tale told by an idiot with son and lumière. It is a light show, an industrial show, a circus show, a freak show—everything but a show show. It belongs in a sports arena, exhibition hall, or oversize discotheque; all it can do in a theater is cheapen it. But the audience palpitating around me was entirely apposite: They looked and behaved like people who had never been to a theater, and “Starlight Express” is guaranteed to do nothing to change that. Perhaps the most characteristic thing about it is a sign reading RALIEGH [sic], for this is postliterate or, at any rate, illiterate theater.

The Tonys are tonight, and, unlike many years, this one is chock full of worthy winners (particularly in the musical category).

To get you warmed up, here’s a short with nominee Tony Yazbeck singing “Lucky to be Me” on the streets of New York from On the Town, the great show by Bernstein, Comden, & Green. (How many sights can you recognize?)

Another nominee is On the Twentieth Century, a revival of the 1978 show, which is getting raves, and which features a role Kristin Chenoweth was born to play. (This show was also written by Betty Comden and Adolph Green, with a glorious score by the much-missed Cy Coleman.) 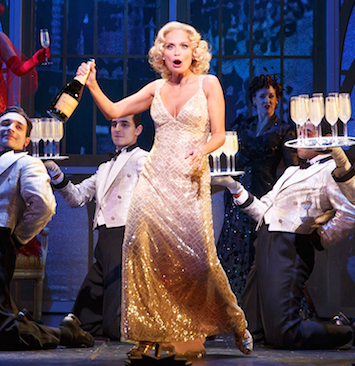 Also worth noting: Fun Home, based on the moving coming-of-age memoir written & drawn by Alison Bechdel. I loved the book but would not have predicted that it would translate effectively to the stage, much less a musical. It has, and features an extraordinary performance by Sydney Lucas as the young Alison.
Check her out in a NYTimes Tony preview:

(Another nominee is an even less likely book to stage transition, Curious Incident of the Dog in the Night-Time.)

The Times is the place to go for more info on the rundown on the broadcast of what is sometimes called “The Gay Superbowl.”