A couple of quotes about books I’ve encountered recently and wanted to keep track of:

“The book is like the spoon, scissors, the hammer, the wheel. Once invented, it cannot be improved. You cannot make a spoon that is better than a spoon… The book has been thoroughly tested, and it’s very hard to see how it could be improved on for its current purposes.” –Umberto Eco

And from Travis McDade’s Thieves of Book Row

“The university I attended, and still attend, is every approachable bookshelf within my knowledge.” Charles Romm, (alas a notorious book thief himself).

Great piece by Butch Ward over at Poynter, “Should your newsroom act more like a startup?” pegged to the unsurprising news that Chris Hughes is giving up the ghost at The New Republic. His stormy tenure as publisher has been correlated with its growing irrelevancy.

Hughes and his minions, like many many others, wanted to bring a “start up mentality” to the venerable opinion weekly.  (The editor said he wanted to “break shit” which is apparently how some nerds show their authenticity.)

But leaving aside TNR‘s troubles, Ward makes a point that newspapers–and many other legacy companies–miss when they embark on “act like a start up” path. For one, that starts up usually often end in failure; it’s built into the model. But sort of paper failures, as there is still more money sloshing around in the real tech start up space and it’s not unusual for somebody to go from one to the next with transferable tech skills and industry connections. This isn’t necessarily the story of laid off newspaper reporters. money doesn’t tend to slosh towards them with any reliability. (Last I checked you can’t turn your Pulitzer in for stock options.)

“Silicon Valley has a no-lose culture: you join a startup, and either it succeeds, in which case you win, or else it doesn’t, in which case you just join another. Failure is victimless, and indeed can be worn as a badge of honor. And precisely because failure is so socially acceptable, it is also extremely common; young companies regularly take crazy existential risks because the downside (another free roll of the dice) is so acceptable, while the upside is unlimited.”

It’s also worth pointing out that even the upside outcome to startup culture is hard to map onto the news business (is there an example of one to point to, what would count as true success) A real startup that grows maybe goes public or gets sold (either to be absorbed or to be raided for its technology), and learns to do new, and seemingly unrelated things (say a retail shipping company that becomes a TV studio).

Perhaps newspapers can morph in such ways, but Ward makes another point, namely that it’s not in their DNA:

You are not a startup.

Jim Brady, founder of Billy Penn, the online news site in Philadelphia, raises his voice when he makes that point. “You are not a startup!” he repeats. The fact that your organization is an established business means you don’t qualify as an initiative with no history, no customers and no brand.

How do you behave like a start up if you are curating a legacy and a brand that goes back a century? If the “shit” you want to break is who you are, why do you expect a start up that breaks that to succeed? Deep down, do you even want it to?

This “are you my start up?” question also seems applicable to other areas: in my (admittedly musty) worlds of education, performing arts and libraries, the same kind of “startup” mania has been applied and at least to my eyes has been attended by very little success. But that’s a rant for another day.

If you are in the news biz, though, well worth reading Ward’s full piece. 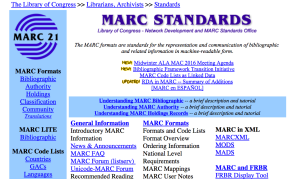 Likely only of interest to library nerds or technology history types, but here’s an interesting piece in American Libraries about how the technology behind library catalogs & how it drove standards (and came to be limited by them).  I lived through a lot of these shifts, including the end of the physical catalog at the Library of Congress. Henriette Avram (mother of the computerized format of bibliographic info)  was still working there at the time and treated with the same sort of awed respect that TBL got in early web days.
From the piece:

“[Melvil] Dewey did not anticipate the availability of the LC printed card service when he proposed the standardization of the library catalog card, yet it was precisely that standardization that made it possible for libraries across America to add LC printed cards to their catalogs. Likewise, Avram did not anticipate the creation of the computerized online catalog during her early work on the MARC format, but it was the existence of years of library cataloging in a machine-readable form that made the Online Public Access Catalog (OPAC) a possibility.”

MARC automated a process, but it was founded on the idea of printing, wrangling and using a physical card, and this has led to any number of misfires…

We, and by “we” I mean all of us in library technology during this time, created those first systems using the data we had, not the data we would have liked to have had. The MARC records that we worked with were in essence the by-product of card production. And now, some 35 years later, we are still using much the same data even though information technology has changed greatly during that time, potentially affording us many opportunities for innovation. Quite possibly the greatest mistake made in the last two to three decades was failing to create a new data standard that would be more suited to modern technology and less an imitation of the library card in machine-readable form. The MARC record, designed as a format to carry bibliographic data to the printer, was hardly suited to database storage and manipulation. That doesn’t mean that databases couldn’t be created, and to be sure all online catalogs have made use of database technology of some type to provide search and display capabilities, but it is far from ideal from an information technology standpoint.

Not to mention a pain for the user. What’s puzzling to me is why we are still stuck with a system that technology has blown past. Karen Coyle wonders too:

The entire basis of the discovery mechanism addressed by the cataloging rules has been rendered moot in the design of online catalogs, and the basic functioning of the online catalog does not implement the intended model of the card catalog. Parallel to the oft-voiced complaint that systems developers simply did not understand the intention of the catalog, the misunderstanding actually goes both ways: Significant differences in retrieval methods, that is, sequential discovery on headings versus set retrieval on keywords, did not lead to any adaptation of cataloging output to facilitate the goals of the catalog in the new computerized environment. Library systems remain at this impasse, some 35 years into the history of the online catalog. The reasons for this are complex and have both social and economic components.

I wonder if they still teach MARC coding in library school? As Wikipedia points out, it’s clearly technically obsolete, but 30 million plus libraries keep track of their collections that way, as the famous saying goes, ” what is to be done?”

Clear thoughts on ed tech and the future from a hero of mine. I would go further even than Larry–not only are the big questions about teaching and learning, its purposes, means, and content more important; the endless noisy hum of speculation and consumer reports level chatter about the so-called revolutionary potential of ed tech mostly is a white noise generator to keep the discussion of the deeper issues inaudible.

One easily trips over a list of high-tech tools that have become obsolete in the past decade (e.g., floppies, fax machines). I used many of these myself and remember junking them, saying to myself: hey, these were highly touted, I bought the second- or third-generation version and now I am dumping them.  Other lists of high-tech predictions for 2020 were equally entertaining about the future of schools. This list posted by a high-tech enthusiast who yearns for a paperless society and totally customized instruction with smaller, greener schools tickled me because while I do agree with some of the items, others are, well, dreams. I have been reading such dream lists for years about high-tech devices (with brand-new names) promising a glorious (or nefarious) future just around the corner, including the disappearance of the teacher (see here).

Some choice bits from Chapter 3, “The Composition of Music” from his Poetics of Music in the form of six lessons“, which befuddled me in college but now makes sense. 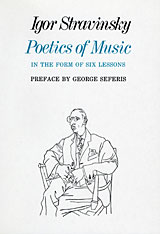 All creation presupposes at its origin a sort of appetite that is brought on by the foretaste of discovery. This foretaste of the creative act accompanies the intuitive grasp of an unknown entity already possessed but not yet intelligible, an entity that will not take definite shape except by the action of a constantly vigilant technique.

This appetite that is aroused in me at the mere thought of putting in order musical elements that have attracted my attention is not at all a fortuitous thing like inspiration, but as habitual and periodic, if not as constant, as a natural need.

The premonition of an obligation, this foretaste of a pleasure, this conditioned reflex, as a modern physiologist would say, shows clearly that the idea of discovery and hard work is what attracts me.

The very act of putting my work on paper, of, as we say kneading the dough, is for me inseparable from the pleasure of creation. So far as I am concerned, I cannot separate the spiritual effort from the psychological and physical effort; they confront me on the same level and do not present a hierarchy. The word artist which, as it is most generally understood today, bestows on its bearer the highest intellectual prestige, the privilege of being accepted as a pure mind–this pretentious term is in my view entirely incompatible with the role of homo faber.

We have a duty toward music, namely to invent it. I recall once during the war when I was crossing the French border, a gendarme asked me what my profession was. I told him quite naturally that I was an inventor of music. The gendarme, then verifying my passport, asked me why I was listed as a composer. I told him that the expression “inventor of music” seems to fit my profession more exactly than the term applied to me in the documents authorizing me to cross borders.

Invention presupposes imagination but should not be confused with it. For the act of invention implies the necessity of a lucky find and of achieving full realization of this find. What we imagine does not necessarily take on a concrete form and may remain in the state of virtuality, whereas invention is not conceivable apart from actual working out…