Via a visit to a real bookstore, found my way to Ali Almossami, an author and software engineer, who has done the public service of posting a free book on bad arguments. 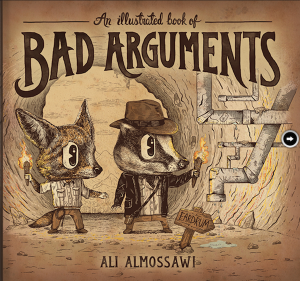 Amusing examples and illustrations, covering some of the same ground I encountered implicitly in high school geometry and directly in a college logic course, using Copi’s text, nicely summarized over at the Stanford Encyclopedia of Philosophy (and of course philosophized about at length).

For all these efforts, we seem to be drowning in bad arguments all the time (as it has ever been).

Came across this photo of great books steps at a university in Lebanon in a post on Brian Leiter’s philosophy blog. As a long time list-maker (who did a lot of it when I co-produced a show on world literature),  I’m always interested in choices of this kind. 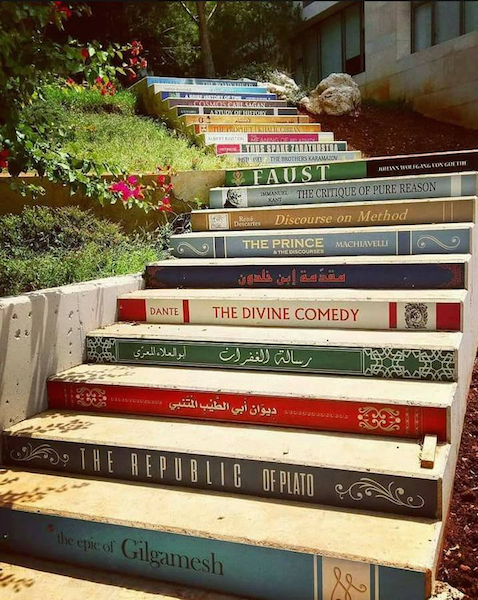 Lots of these make sense to me, Gilgamesh is an inevitable and reasonable starting point.  I don’t read Arabic so can’t assess those titles. The others are mostly good company, whether literary monuments like Goethe or Dante, or core philosophy texts from The Republic to Thus Spake Zarathustra. And while I get while The Prophet, Steven Hawking, and even Toynbee are there. But the final step appears to be Bill Gates’ The Road Ahead has me a bit stumped, although acknowledgment of the digital age is valid, and perhaps what seemed like a tepid read 20 years ago or so has aged better than I would have predicted. But in the company of Descartes? Kant?  For reals?

I like the collection of books that the Kansas City Public Library built into its architecture too:

Enjoying a little book of quotes and reflections by Daniel Klein, comedy writer and student of philosophy (a man after my own heart).  A few bits from his “Every Time I Find the Meaning of Life, They Change It.”

“If you believe that feeling bad or worrying long enough will change a past or future event, then you are residing on another planet with a different reality system.” — William James

The levels of Tzedakah (charity) as explained by Maimonides

Aeon has a great essay by the philosopher Galen Strawson on the dangerous idea that life is a story. At least dangerous for the non-narrative types among us.

“Perhaps. But many of us aren’t Narrative in this sense. We’re naturally – deeply – non-Narrative. We’re anti-Narrative by fundamental constitution. It’s not just that the deliverances of memory are, for us, hopelessly piecemeal and disordered, even when we’re trying to remember a temporally extended sequence of events. The point is more general. It concerns all parts of life, life’s ‘great shambles’, in the American novelist Henry James’s expression. This seems a much better characterisation of the large-scale structure of human existence as we find it. Life simply never assumes a story-like shape for us. And neither, from a moral point of view, should it.”

He pulls into service a couple of other views, most elegantly Virginia Woolf, who goes for a sort of bundle of phenomena argument, at least in this passage.

Examine for a moment an ordinary mind on an ordinary day. The mind receives a myriad impressions – trivial, fantastic, evanescent, or engraved with the sharpness of steel. From all sides they come, an incessant shower of innumerable atoms; as they fall, as they shape themselves into the life of Monday or Tuesday, the accent falls differently from of old; the moment of importance came not here but there; so that, if a writer were a free man and not a slave, if he could write what he chose, not what he must, if he could base his work upon his own feeling and not upon convention, there would be no plot, no comedy, no tragedy, no love interest or catastrophe in the accepted style, and perhaps not a single button sewn on as the Bond Street tailors would have it. Life is not a series of gig lamps symmetrically arranged; life is a luminous halo, a semi-transparent envelope surrounding us from the beginning of consciousness to the end.

And also Mary Midgley and Paul Klee on containing multitudes:

Midgley: [Doctor Jekyll] was partly right: we are each not only one but also many… Some of us have to hold a meeting every time we want to do something only slightly difficult, in order to find the self who is capable of undertaking it… We spend a lot of time and ingenuity on developing ways of organising the inner crowd, securing consent among it, and arranging for it to act as a whole. Literature shows that the condition is not rare.

and Klee: My self… is a dramatic ensemble. Here a prophetic ancestor makes his appearance. Here a brutal hero shouts. Here an alcoholic bon vivant argues with a learned professor. Here a lyric muse, chronically love-struck, raises her eyes to heaven. Here papa steps forward, uttering pedantic protests. Here the indulgent uncle intercedes. Here the aunt babbles gossip. Here the maid giggles lasciviously. And I look upon it all with amazement, the sharpened pen in my hand. A pregnant mother wants to join the fun. ‘Pshtt!’ I cry, ‘You don’t belong here. You are divisible.’ And she fades out.

Strawson’s piece is a good read, although I do wonder if the overheated “life is a story, life is a journey” trope, which raises my hackles too, amounts to much more than a tactic or habit, rather than something essential about our selves in a philosophical sense. Perhaps it’s just a convenience, like an algorithm that makes a complicated reality seem tractable.

A few web bits and bobs on Philosophy, a hobby of mine.

First, the unusual news (to me at least) that the French require high school students to do an essay on philosophy as part of their graduation requirements. A piece in The Week offers some praise, but much dismay as well.

Finally, the essay. The Bac Philo is a four-hour essay test. But not just any kind of essay. You have to write a very specific kind of essay, une dissertation. The dissertation is a form of essay writing that is so deeply and artificially codified as to make kabuki look like an epileptic fit. Taking a stand — answering one of those questions with either “yes” or “no” — is absolutely prohibited. Instead, the author must restate what other thinkers have said about the issue, even when they contradict each other, and try to reconcile their differences (without seeming to do that).

The best essay I wrote for AP English in my senior year was an argument for offering philosophy classes in high school. Looking at some of the questions from the Bac Philo (listed by teaching and learning expert Grant Wiggins) and pondering what my 18 year-old-self would have made of them is an interesting thought experiment. I’m sure I would have been engaged by them, whether my answers would have been coherent and reasoned…probably not so much.

Probably not a one of them on the Google employment exam!

Second, tipped by Brian Leiter’s great blog, I’ve been enjoying a series called “What’s it Like to Be a Philosopher?” Fascinating people, straightforward but illuminating questions, appealing website. An excerpt of the one with Berit “Brit” Brogaard,

What do you think the goal of philosophy is or should be? How do you see the future of philosophy? Do you find any trends disconcerting?

I think the goal of philosophy should be what it always has been: to shed light on topics that cannot be fully empirically explored yet. I don’t think philosophers need to be concerned with how the heart is capable of pumping blood, because we have good scientific theories about that, theories that have been explored and tested. But there are many other problems that science has not yet been able to revolve fully, e.g. various normative issues and elusive scientific topics, such as consciousness. I don’t find any trends in philosophy disconcerting. I love variety.

What, if anything, would make you stop doing philosophy? What are your hobbies nowadays?

Nothing could ever make me stop loving philosophy. It’s my job and my hobby. I am still writing poetry, and I just wrote the script for a graphic novel. The graphic novel is about Freud. It’s semi-biographic. It’s just the script. My illustrator will have to do the illustrations on the side, and those can take a long time (a day per panel), so this book is not going to be finished anytime soon. But I am very excited about the script. My favorite graphic novel of all times is Logicomix, and our book is not unlike it.

Finally, a radio show and podcast (also discovered via a comment on Leiter Report), Philosophy Talk.

Seems unlikely, I know, but the two hosts are a sort of “Click and Clack” of philosophy; there’s a lot of friendly banter about topics that vary wildly (including going past their particular specialties.) The series has been going on a while, and is free during the current week, with many shows in the archive and a lively community. It can be hit or miss, but the best of the shows definitely give you something to chew on.

Jason Stanley, a philosophy professor at Yale, has written a thought-provoking and personal essay about the issues swirling around the Middle East.

I have heard those with similar family histories say this about all groups: that each group is safe only among its members. It is understandable that those who experienced what my mother and her family experienced would take away from history the lesson that everyone hates the Jews, and therefore that Jews are only safe in a nation of Jews. But this is nothing less than a repudiation of the conception of citizenship at the heart of liberal democracy. Democracy has two chief values, autonomy and equality. In a democracy, citizens have the freedom to pursue their own life paths. The choices they take cannot compromise their political equality, that is, their equality as citizens. The test of a democracy is how it allows difference to flourish; this shows that political equality does not depend upon taking a particular life-path or following certain religious beliefs. The basis for political equality is equal respect. A democracy is a state in which equal respect flourishes among its members.

Worth reading in its entirety.

This also ran in  German, in the Frankfurter Allgemeine.

While listening to a philosophy podcast, I heard Massimo Pigliucci, the philosopher behind the interesting webzine http://scientiasalon.wordpress.com/, mention that Max Planck did not resort to complicated theories of how new scientific understandings replace old ones. No, like many other areas of human endeavor, ideas meet their expiration date when those who hold them meet theirs:

“A new scientific truth does not triumph by convincing its opponents and making them see the light, but rather because its opponents eventually die, and a new generation grows up that is familiar with it.”