MOOCs, like many educational innovations that have come before them, are a flashpoint for certain kinds of rather tired arguments about the supposed eternal verities about what schooling should be. It’s a feeble flap, particularly since we are in not just early days but minute 1 or 2 of the whole change that online education will foment. The anti-MOOC case is also full of the weird mash up of empirical and conceptual carping that fights over education seem prone to. Two of the strands:

1. The philosophical opposition seems to go something like: MOOCs do not provide sufficient texture of experience to count as education, and are, further, an effort to outsource teaching via a technological approach, something which, for ineffable reasons, has to be, or is at least optimally, delivered in person as part of a (preferably, super-exclusionary) community.

2. The empirical complaint seems to be: look, they don’t work anyway, as most people don’t “complete” them, so therefore they can’t have any merit.

Both of these I think are refutable on their own, but they are basically self-refuting when mashed together. Good things those completion rates are low, even though that is arguably a meaningless metric, because, we shouldn’t be doing these things anyway.

I’m sanguine to optimistic about MOOCs and what they may lead to, and certainly feel deserve their chance to weave their thread in the Internet tapestry. My guess is that some of the growing pains result not from any problem in online delivery per se, but the sort of sad effort to replicate the format of a “course,” and the attendant forced march through the curriculum. (Curricula, whatever else they do, instantiate ideology and culture, something I’ll blather on about another time.)

Getting a topic into some 13-week chunk for in-person delivery including the duly required mid-term, final, and term paper, is already artificial: an historical reenactment of an approach that was creaky 100 years ago. Preserving it online has never made any sense to me, except for laziness and resistance to change that academic institutions, and truthfully teachers, often fall into.

The other thing I think is not just promising about MOOCs, but here now and heartening, is how much humanities content they offer. In a time when there’s much stewing about the ailing state of the arts & humanities, there are crowds joining MOOCs on humanities topics and participating with enthusiasm. (Once upon a time you could get this subject on public broadcasting, even sometimes on commercial TV, but priorities have shifted.) Two, of many, examples: a course on the Beethoven Piano Sonatas with Jonathan Biss, and on Modern and Contemporary American Poetry, which is the closest I’ve found to busting open the idea of a course, it is really more of a community event, and the better for it.

Still, to give the opposition their say, here’s a delightful animation taking up the contra side (including an argument that it’s all about money that I’ll hang fire on until another day). Daphne, Sebastian, and Anant make such adorable video game characters, I think they should consider that as an add on career. 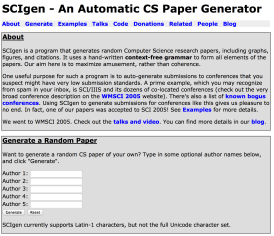 some of the nonsense that makes it into conference proceedings is not the work of weary academics with unfortunate prose styles,  it’s just computer-generated gibberish. A report on the Nature Web site has the embarrassing disclosure that scientific and technical publishers are now pulling over 100 fake papers that got through “review for merit and content” despite being computer-generated garbage. (How did they pass peer review? Does one computer algorithm just check another computer’s output to make sure it’s “quality gibberish”?)

From the opening of the piece:

The publishers Springer and IEEE are removing more than 120 papers from their subscription services after a French researcher discovered that the works were computer-generated nonsense.

Over the past two years, computer scientist Cyril Labbé of Joseph Fourier University in Grenoble, France, has catalogued computer-generated papers that made it into more than 30 published conference proceedings between 2008 and 2013. Sixteen appeared in publications by Springer, which is headquartered in Heidelberg, Germany, and more than 100 were published by the Institute of Electrical and Electronic Engineers (IEEE), based in New York. Both publishers, which were privately informed by Labbé, say that they are now removing the papers.

Later in the piece, there’s this delicious bit of how to:

How to create a nonsense paper

Labbé developed a way to automatically detect manuscripts composed by a piece of software called SCIgen, which randomly combines strings of words to produce fake computer-science papers. SCIgen was invented in 2005 by researchers at the Massachusetts Institute of Technology (MIT) in Cambridge to prove that conferences would accept meaningless papers — and, as they put it, “to maximize amusement”

I’m surprised that it wasn’t “fake social-science” or “fake lit crit,” after all, the knock-offs being so difficult to tell apart from the real product. I hope the software is still in development, and we’ll have modules soon for fake “Judith Butler” or “Slavoj Žižek.”

P.S. Wikipedia discloses that it’s been going on for years! Academic Spam.