Data visualization, data journalism and the ethical & societal implications of big data are the questions of the moment, and likely to be with us for a long time. (In one sense, Snowden/Wikileaks/NSA is a big data story.) It would be interesting to have a taxonomy of the technologies and interfaces by which big data does its work: maybe some industrious grad student out there has already done one. Visualization and aggregation are reasonable categories to have, and “gamification” seems to be what a site called “We Are Data” adds to the mix.

I’d never heard of WatchDogs, a game from UBI Soft. It immerses you in a fictional Chicago, with dashboards full of data about what is going on from a city under the full range of modern surveillance and social media feeding the web with info.

Now some developers have taken that idea to three real cities. From their web site:

In the video game Watch_Dogs, the city of Chicago is run by a Central Operating System (CTOS). This system uses data to manage the entire city and to solve complex problems,such as traffic,crime, power distribution and more…

This is not fiction anymore. Smart cities are real, it’s happening now. Huge amounts of data are collected and managed every day in our modern cities, and this data is available to anyone.

Watch_Dogs WeareData is the first website to gather publicly available data about Paris, London and Berlin, in one location. Each of the three towns is recreated on a 3D map, allowing the user to discover the data that organises and runs modern cities today, in real time. It also displays information about the inhabitants of these cities, via their social media activity.

What you will discover here are only facts and reality.

Watch_Dogs WeareData gathers available geolocated data in a non-exhaustive way: we only display the information for which we have been given the authorization by the sources. Yet, it is already a huge amount of data. You may even watch what other users are looking at on the website through Facebook connect.

If you are interested in this subject, we’d love to get your feedback about the website and about our connected world.

Everyone has their part to play and their word to say.

Lots of provocative ideas here: the notion of a city having an “operating system” in the game, and visualizing something that aggregates it somehow (even though it doesn’t exist per se.) There’s also a “down the rabbit hole” line of thought about personal statistics, how we are partaking of the sum of all these numbers and bits that we are moving through for example, as we walk down a street in London.

It’s also quite beautiful. I could do without the anodyne music, but it is inspired by a video game, so that’s kind of required.

Found a web gizmo (I’m sure there are many more) that does personal data visualization (a flavor of the quantified self stuff). It’s called Datum and I found out about it via http://www.librarian.net/. Nicely done design and some real thought went into the UX. Report on how it works to follow. 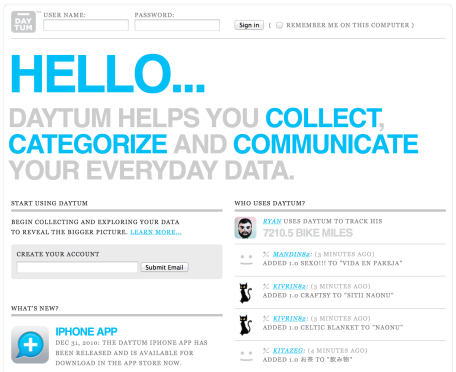 If the 1971 classic, “Our Bodies, Ourselves” were to be updated again, it would have to be “Our Data, Ourselves.”