Boston Review has a perceptive, and droll, review of a new philosophy title, Retrieving Realism by Hubert Dreyfus and Charles Taylor. There are lots of interesting takes in it and John Dewey and Martin Heidegger figure prominently. (So of course I was interested, as Dewey is a fascinating figure to me.)

The full review will likely be of interest mainly to philosophy nerds like myself, but one passage was too good to pass up quoting. Just after untangling a number of moves and distinctions presented in the book, Godfrey-Smith writes,

I don’t want to suggest, through this assertion of Dewey’s place in the story, that he had all the answers. Far from it, and I will look in a moment at an area he handled quite badly. In explaining his larger neglect in this part of philosophy, I am also mindful of other deficiencies. Dewey’s writing has an exhausting earnestness, which contrasts with the dark edginess, the anything-can-happen feel of Heidegger’s. If someone sees you reading Heidegger on a train, they might think you would be an interesting person to have sex with. If they see you reading Dewey, there is a risk they will think you would be an excellent person to serve on a committee. 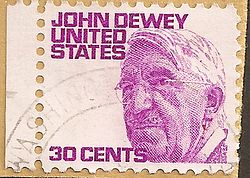 Personally, seeing somebody peruse Sein und Zeit on the Red Line wouldn’t exactly flick my switch, but I can vouch for the fact that Dewey evokes committee service: perhaps because it reads a bit like it was written by a committee, and ‘exhaustingly earnest’ is definitely apt as well.

Philosopher John Dewey (he of “education is not preparation for life; education is life itself”) on the questions we find ourselves vexed over.

“Old ideas give way slowly; for they are more than abstract logical forms and categories. They are habits, predispositions, deeply ingrained attitudes of aversion and preference. Moreover, the conviction persists — though history shows it to be a hallucination — that all the questions that the human mind has asked are questions that can be answered in terms of the alternatives that the questions themselves present. But in fact intellectual progress usually occurs through sheer abandonment of questions together with both alternatives they assume — an abandonment that results from their decreasing vitality and a change of urgent interest. We do not solve them: we get over them.”

–John Dewey: The Influence of Darwinism on Philosophy

Which for some reason (obscure to me at just this moment) seems to echo this line of Ernest Hemingway’s: