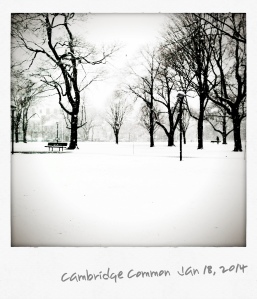 In my long-ago college days, Hardy the novelist was celebrated, and Hardy the poet was–other than a few well-anthologized poems like The Darkling Thrush–passed over without comment by the faculty and the English majors. He was too Victorian, too prolific, a relic, and flat.

I’m glad to say that bias has passed, and the craft and depth of his poems are now valued (in concert with, rather than in opposition to, what else was going on in the early 20th century poetically).

Here’s one, chosen in honor of the gentle dust of white on our sort of suburban, even rural, back patio.