There is so much in the news about the “Internet of Things” and its promise and peril. It will, like everything else in our networked world, change everything, except the things it doesn’t. One reliable tech trend that it is here already and showing no sign of going away is the goofy naming of tech services, particularly software companies and their eponymous products.

As I left San Jose last week, a giant conference for Strata/Hadoop, which sounds like something the Sims would order in a coffee shop, “with an extra pump of zim please, and venti,” was getting underway. Hadoop I learned is the way Facebook, Yahoo! and all the rest make happy with our data and it is named after a stuffed animal belonging to the young son of one of the original creators of the software. The original name sake was a rather fetching yellow elephant.

Software names are it turns out intentionally meaningless (and sometimes the fodder for off color jokes). Hadoop has spawned a truly awesome eco-system of cheerfully named nonsense: 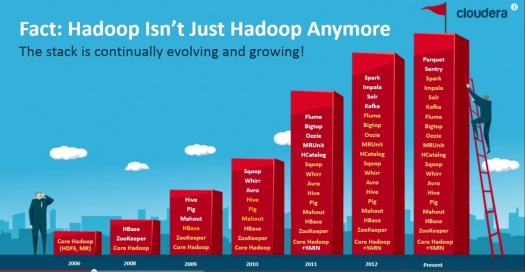 Avro, Squoop, Whirr, Kafka, Oozie, and Flume! Such linguistic wonders evoke those 18th century novels and plays with their colorfully satirical names, or Thomas Pynchon whose fondness for silly names echoes this world and perhaps is informed by his prodigious technical learning.  There is, of course, software just to create a silly name for your company. (Must have some hidden algorithm to get the trendiest double vowel; is any tech name more perfect for sound and sense than “buzz feed”? –it is what it says on the tin, and it’s fun to say!)

None of these is, it seems safe to say,  a “thing” in the sense of tangible item, but I guess as “all that is solid melts into [virtual] air” the names of the programs that will run our Internet of things, and us,  will at least provide a giggle.  Very truly yours, Mahout Yarn Pig.