Writing on music is a fraught business:

“If a literary man puts together two words about music, one of them will be wrong.”–Aaron Copland, (author of some books of his own on music, plainspoken style but still very readable). Elvis Costello also put in his two cents, “Writing about music is like dancing about architecture.” (At least that’s a possibility…)

But there is one writer on music who is dancing all the time and a marvel of style, Hector Berlioz, who was also a critic, author of a book on orchestration, and avid correspondent (as was Verdi, whose letters are a treasure).

Berlioz wrote a long, rollicking, and moving memoir. (If not factually reliable in all regards about the man, it still captures truth about the composer.) It is also a ring-side seat for a lively era in music history, with a chatty wit, who was full of opinions and who knew everybody and traveled everywhere for a companion.

You can dip in anywhere, but here is his account of the first performance of his earth-shattering Requiem, and the near disaster that befell one of his most wondrous effects, the entrance four brass choirs that create the sound of the “last trumpet” in the Dies Irae. 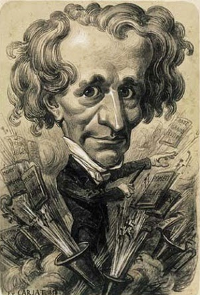 My performers were divided in a number of groups at some distance from each other. This is necessary for the four orchestras of brass instruments which I have used in the Tuba mirum, and which must each be placed at one corner of the large mass of singers and players. At the point where they make their entry, at the start of the Tuba mirum which follows the Dies irae without a break, the tempo broadens to half its previous speed. All the brass instruments enter in the new tempo, first all together, then in dialogue with each other in successive entries each a third higher than the previous one. It is therefore of the utmost importance to indicate clearly the four beats of the bar at the moment when they come in. Without that, this awesome musical cataclysm, so carefully prepared, where exceptional and tremendous means are used in proportions and combinations never attempted before or since, this picture of the Last Judgement, which will, I hope, live on as a great landmark in our art – all this is in danger of resulting in an enormous and dreadful cacophony.

Because of my habitual suspicion, I had posted myself behind Habeneck. [The conductor] With my back to his, I was watching the group of timpani players, which he could not see, as the moment approached when they were to take part in the general mêlée. There are perhaps a thousand bars in my Requiem. At precisely the point I have been speaking of, when the tempo broadens and the brass instruments launch their awesome fanfare, in the one bar where the role of the conductor is absolutely indispensable, Habeneck lowered his baton, quietly pulled out his snuff box and started to take a pinch of snuff. I was still looking in his direction. Immediately I pivoted on my heels, rushed in front of him, stretched out my arms and indicated the four main beats of the new tempo. The orchestras followed me, everything went off as planned, I continued to conduct to the end of the piece, and the effect I had dreamed of was achieved. When at the last words of the chorus Habeneck saw that the Tuba mirum was saved: “What a cold sweat I had, he said, without you we were lost! – Yes, I know very well,” I replied, looking straight at him. I did not add a word … Did he do it on purpose?… Is it possible that this man, in concert with M. XX. who hated me, and the friends of Cherubini, could have dared to plan and attempt such a despicable deed?… I do not want to think about it… But I have no doubt. May God forgive me if I am doing him an injustice.

The success of the Requiem was complete, in spite of all the conspiracies, cowardly or criminal, official and unofficial, which had tried to prevent it.

Although that is one of the great moments in music, you need it in context, and for a taster, here is Berlioz in another mood, his “Harold in Italy,” a wandering musical journey for viola and orchestra.

The memoir is a wonderful read, and I’m partial to the Cairns translation.