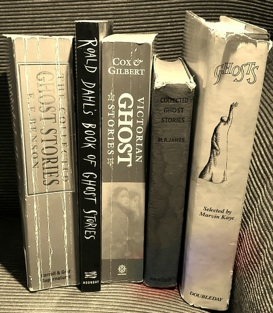 Herewith my first annual round-up of ghost story collections–there are many wonderful ones, and seldom does an October go by that I don’t find a new anthology (or at least one new to me).

I’ll roll out an entry each day this week.

1) The Collected Ghost Stories of E.F. Benson. The British writer is best known for the Mapp and Lucia series of social comedies set among the English smart set of the Twenties. He wrote a large number of elegant–if often shiver-free–ghost stories, often set among the same Masterpiece Theater crowd, and evoking the dappled shadows of leaves falling on windows of great country houses, where a face appears and then dissolves.

The opening of “How Fear Departed from the Long Gallery” provides a good idea of what he’s up to:

Church-Peveril is a house so beset and frequented by spectres, both
visible and audible, that none of the family which it shelters under
its acre and a half of green copper roofs takes psychical phenomena
with any seriousness. For to the Peverils the appearance of a ghost is
a matter of hardly greater significance than is the appearance of the
post to those who live in more ordinary houses. It arrives, that is to
say, practically every day, it knocks (or makes other noises), it is
observed coming up the drive (or in other places). I myself, when
staying there, have seen the present Mrs. Peveril, who is rather
short-sighted, peer into the dusk, while we were taking our coffee on
the terrace after dinner, and say to her daughter:

“My dear, was not that the Blue Lady who has just gone into the
shrubbery. I hope she won’t frighten Flo. Whistle for Flo, dear.”

(Flo, it may be remarked, is the youngest and most precious of many
dachshunds.)

Blanche Peveril gave a cursory whistle, and crunched the sugar left
unmelted at the bottom of her coffee-cup between her very white teeth.

“Oh, darling, Flo isn’t so silly as to mind,” she said. “Poor blue
Aunt Barbara is such a bore! Whenever I meet her she always looks as if she wanted to speak to me, but when I say, ‘What is it, Aunt Barbara?’ she never utters, but
only points somewhere towards the house, which is so vague. I believe
there was something she wanted to confess about two hundred years ago,
but she has forgotten what it is.”

Here Flo gave two or three short pleased barks, and came out of the
shrubbery wagging her tail, and capering round what appeared to me to
be a perfectly empty space on the lawn.

“There! Flo has made friends with her,” said Mrs. Peveril. “I
wonder why she dresses in that very stupid shade of blue”

Not all the ghosts at Church-Peveril are quite so domesticated it turns out, and they cause more than just sartorial dismay. 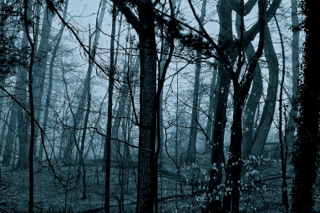