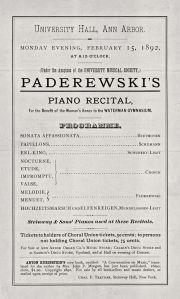 Involved as I have been over the years in classical piano recitals (mostly attending and writing about them, rather than giving them), I’ve thought a lot about how the programs are put together. One template is the anthology. It goes something like this: kick off with Scarlatti Sonatas (or a Bach WTC Prelude and Fugue), then offer a first course of Mozart Sonata in C K. 330, (or more adventuresomely, his lovely Duport Variations). Main course closing the first half will be something hearty, but in parts, one of the Schumann sets, maybe Waldszenen. And when people come back after intermission, it’s time for a trip up the mountain . The most frequently encountered vehicle for the journey seems to be one of the late Schubert Sonatas, but Beethoven of course will also be considered, and there are offerings by many others–one of the best second halfs I ever heard was the complete Études-Tableaux of Rachmaninoff.

There’s still a lot of life in this plan, but it does risk monotony. As well, although the performer no doubt puts a lot of thought into the order and meaning of the pieces as a larger experience, the audience can miss this. The familiar format can, and often does, let the audience off the hook from any effort to figure out what is going on.

Not so in this wonderful recital by Israeli pianist Matan Porat. “Variations on a theme by Scarlatti” takes a Scarlatti sonata as an opening, but observing the stepwise character in this piece’s  material, builds out a program that riffs on that as a set of variations that lasts the whole concert/CD. Works from different styles, periods, and emotional registers come together, but with something related, and a really engrossing musical conversation ensues. At first pieces seem plucked randomly (one piece from within Waldszenen, side by side with Boulez, and Ligeti too?) Soon, you do the work as you listen, finding the connections within pieces, and from piece to piece in the whole set. I found myself asking what idea is repeated, what is varied, and why? How do these things relate? By the end, I was hearing new things in works I know very well, and hearing familiar things in works that were new to me.

It’s a wonderful idea, and a great inspiration for thinking about a recital as a work of art in and of itself.

Here’s a video of the start of the program, and the whole thing is on Naxos Music Library (where I heard it) but also I’m sure on iTunes and Amazon, and Porat has a web site.