Given my love of libraries and poetry (and the fact that there was at least one great poet, Philip Larkin who was also a librarian), odd that I haven’t posted anything on the intersection of these worlds.  But here’s a nice one by American poet Rita Dove.

For a fifteen-year-old there was plenty
to do: Browse the magazines,
slip into the Adult Section to see
what vast tristesse was born of rush-hour traffic,
décolletés, and the plague of too much money.
There was so much to discover—how to
lay out a road, the language of flowers,
and the place of women in the tribe of Moost.
There were equations elegant as a French twist,
fractal geometry’s unwinding maple leaf;

I could follow, step-by-step, the slow disclosure
of a pineapple Jell-O mold—or take
the path of Harold’s purple crayon through
the bedroom window and onto a lavender
spill of stars. Oh, I could walk any aisle
and smell wisdom, put a hand out to touch
the rough curve of bound leather,
the harsh parchment of dreams.

but all I wanted to know was:
Tell me what you’ve read that keeps
that half smile afloat
above the collar of your impeccable blouse.

So I read Gone with the Wind because
it was big, and haiku because they were small.
I studied history for its rhapsody of dates,
lingered over Cubist art for the way
it showed all sides of a guitar at once.
All the time in the world was there, and sometimes
all the world on a single page.
As much as I could hold
on my plastic card’s imprint I took,

greedily: six books, six volumes of bliss,
the stuff we humans are made of:
words and sighs and silence,
ink and whips, Brahma and cosine,
corsets and poetry and blood sugar levels—
I carried it home, past five blocks of aluminum siding
and the old garage where, on its boarded-up doors,
someone had scrawled:

I can eat an elephant
if I take small bites.

Yes, I said, to no one in particular: That’s
what I’m gonna do!

Turns out Larkin did pen one:

New eyes each year
Find old books here,
And new books, too,
Old eyes renew;
So youth and age
Like ink and page
In this house join,
Minting new coin.
————————————
Although, as a heavy user, I have multiple suppliers, for many years my main library was the Somerville Central Library, quirky but with its own kind of hipster grandeur. 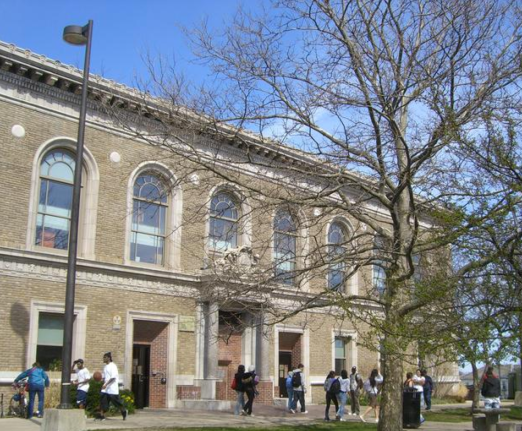