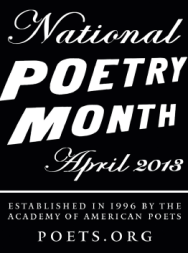 April looms, and it’s going to be all poetry all the time for me, at least I hope.

In advance, I’ve always imagined that it was this text (rather than  T.S. Eliot’s famous line) that clinched the celebration being in April.

The opening of Chaucer’s Canterbury Tales from the Ecker and Crook translation.

When April’s gentle rains have pierced the drought
Of March right to the root, and bathed each sprout
Through every vein with liquid of such power
It brings forth the engendering of the flower;
When Zephyrus too with his sweet breath has blown
Through every field and forest, urging on
The tender shoots, and there’s a youthful sun,
His second half course through the Ram now run,
And little birds are making melody
And sleep all night, eyes open as can be
(So Nature pricks them in each little heart),
On pilgrimage then folks desire to start.
The palmers long to travel foreign strands
To distant shrines renowned in sundry lands;
And specially, from every shire’s end
In England, folks to Canterbury wend:
To seek the blissful martyr is their will,
The one who gave such help when they were ill.

Now in that season it befell one day
In Southwark at the Tabard where I lay,
As I was all prepared for setting out
To Canterbury with a heart devout,
That there had come into that hostelry
At night some twenty-nine, a company
Of sundry folk whom chance had brought to fall
In fellowship, for pilgrims were they all
And onward to Canterbury would ride.

And if you want to get your “Olde English” on, the British Library has lots of resources, including this image from c. 1450.

Could you make out that first line?

Ere begynneth the book of tales of Canterburye compiled by Geffraie Chaucer of Brytayne chef poete.