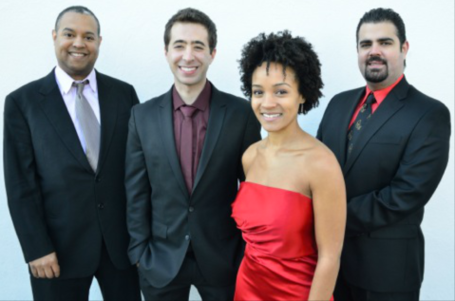 Got myself down to the Terrace Theater at the Kennedy Center last night to hear the Harlem String Quartet with pianist Misha Dichter. They were the subject of great two-part piece by Geoff Edgers in the Globe, and have recently been through a real (rather than made up) personnel crisis. I wanted a chance to hear them in person.

The newly constituted group–both the violist and cellist are recent additions–has great chemistry, and their program of Shostakovich, Chick Corea (with whom they perform), and Schumann came off well–and was a good musical meal. Their playing is sinewy, but also swings. Big moments are invariably thrilling, with a rich full sound (if a tad samey–there is more than one way to light a big canvas, and the Schumann Piano Quintet would have worked better if the range of forte moments had more variety of color.)

The fugue in the Shostakovich Quintet could have been written for them–the insinuating lines crept in like long shots in a great noir classic movie. It’s a “looking around the corner” piece, and first violinist Ilmar Gavilin’s twisty-turny style with a phrase is stunning (he missed a harmonic or two, but like the violist’s sketchy tuning in some of the Schumann, these were easily overlooked blemishes in performances that have so much verve.)

Dicter, admirable and clear though he was, didn’t do a lot for me personally. Big sound, lucid and accurate approach to the notes, but dull tone color and not much English on the ball. I realize that quibble is mostly taste on my part–I like pianists who make the piano sound like anything but a piano, even if they don’t play as well technically as Dichter (and god knows a lot don’t). But he was a good colleague, gamely pounding through “Take the A Train” as an encore with the Quartet, with the subtlety of a Mac truck.

In truth, the subtle light touch is the one thing I was missing in the evening as a whole. The Shostakovich has one of his wondrous, busy scherzos. (Check out Argerich and company in it.) What is the place where this scherzo unfolds? The crazy workshop of a whimsical watch maker? Is some kind of odd handmade contraption taking flight? Harlem St. Quartet played it hell-bent for leather (getting an ovation just for the movement) and it was thrilling, but in an industrial-sized way. The tiny, subtle jokes (a sly piano scale here, a ricochet bowing there) got brushed over. It also seemed rushed; fast music is somehow more (paradoxically) effective when even the most whiplash fast bits seem like they have all the time in the world around them. As the violin teacher Suzuki said in one of his many Zen-like pronouncements, “there is more to life than making it go faster.”

Still, the group has their own rich sound, their own boundless energy and unbridled joy in making music. They are on their way.