From a (somewhat oversold) article in the Washington Post describing controversy about the new English language standards that are part of Common Core (an emphasis on non-fiction reading and writing that’s going to do in poetry and literature!).

One specific bone of contention, “the personal essay.” 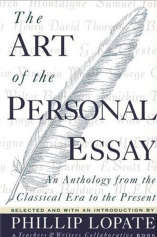 “Forgive me for saying this so bluntly, the only problem with . . . [that] writing is as you grow up in this world you realize people really don’t give a [expletive] about what you feel or what you think,” Coleman said, according to a recording. “What they instead care about is, can you make an argument with evidence, is there something verifiable behind what you’re saying or what you think or feel that you can demonstrate to me? It is rare in a working environment that someone says, ‘Johnson, I need a market analysis by Friday, but before that I need a compelling account of your childhood.’ ”

The ‘Coleman’ quoted above is now president of the college board and was a force behind the standards.

The debate is silly. The standards don’t really pit Malcolm Gladwell against Emily Dickinson, and even if they did, I have no trouble knowing who would win that round. “There’s a certain slant of light/On winter afternoons” is an example of the right words in the right order that the worthy Mr. Gladwell would not come up with.

And as for Coleman’s point. True dat, that analysts probably don’t have to do “A Child’s Christmas in Greenwich” for their bespoke-suited team leaders, but I think “Creative Non-Fiction” certainly has come in handy in the corporate world. Investopedia takes a game stab at explaining “Off-balance sheet entities.” Just getting good names for your made up companies on your financial statements, such a writing challenge! A reminder of some of the wonderful creative non-fiction that Enron provided their entities, thus adding to the canon: Raptor, Osprey, Zenith and Rawhide. Oops, they were fiction after all.