What to do with the main branch of DC’s public library, Ludwig Mies van der Rohe’s Martin Luther King Memorial Library, remains a minor, but contentious, issue in the DC architecture scene. Points of agreement: the building is suffering after decades of deferred maintenance; it’s horrendously expensive to maintain (custom glass and lighting all over); it’s not environmentally efficient, and it doesn’t work well for library users.

Beyond that, there’s not a lot of common ground. Preserving modernist buildings is a passion for some, even buildings like this which arguably never really fit in the context of the city (MLK Memorial Library is Mies’s only DC building, and his only library. It was finished by his associates after his death, which makes its claim to Miesian authenticity a little tenuous.) A bunch of big high profile library construction or renovation projects have been sources of civic pride (Minneapolis, Seattle, Cambridge, MA for instance). Although these observations can be rallied in support of or against the building (His only library? save at all costs! vs. His only library, and  it was a mistake from the start.)

My (uncomfortable) viewpoint is more in the “mistake from the start” camp, and that Mies approach was just not that suitable for libraries…or at least this one. The  scale of the building seems off, and the open span interiors are oddly gloomy and industrial, despite being walled by windows. Admittedly, building a truly great library must be one of architecture’s harder assignments, particularly during the torrent of digital change that is reshaping what libraries are for.

In any event, the pics of the proposed new MLK certainly are enticing. 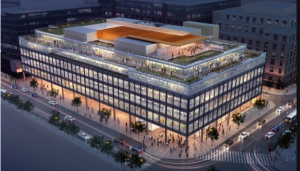