Boston Public Library has wonderful sets of photos on Flickr, and through it I found the tag called “Vintage Illustration” that included this card from NBC about color TV. There’s a nice description of part of the story of its advent…which by 2012 standards was glacial. The Smith household didn’t get a color TV set until 1967. It was still a big deal 14 years after it had launched: we could see the wild Pop-Art colors of Laugh In. 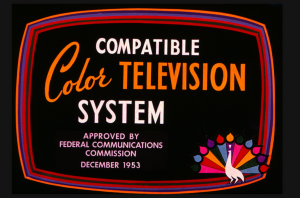 To the ordinary viewer, [color] was just another innovation. But underneath there was an engineering miracle that brought about the ability to transmit and receive a color TV image. It really was an extremely complicated Rube Goldberg scheme that made it all possible.

So how did it work? Any help out there? I sort of understand color film photography, is there an analogy?