Now am back in DC after our Maine vacation, and regularly tooling around downtown (vastly spiffier than my days living here in the 1980s and 90s). Until you come upon the main library, the Mies van der Rohe-designed Martin Luther King Library, which opened in 1972. It is as resolutely unspiffy as ever.

I love libraries, and saying van der Rohe is my favorite architect is an understatement. (I belong to that club of believers who can stare up at the Seagram building and say, “Mies, we are unworthy of your genius” out loud.

And yet, this library, which I’ve spent many hours in, has always seemed like a dud to me, and perhaps was born that way. It has the Miesian trademark characteristics (strong geometry, with the I-beams emphasizing the verticals), the open span approach to the interiors, light from side to side, a grand central space. But it doesn’t click. Maybe the scale is off? Perhaps his ideas just don’t suit the library program? Maybe the building did work in ’72, but has become so run down that its quality has been obscured?

Or could I just be out of sync with it? This is an argument often made about 60s and 70s architecture…in 50 years we’ll be able to “see it again” (well, I probably won’t, but some “we” will). And everyone will be glad that it is still around; a lot of the 19th century buildings aren’t (or are just facades) and much of DC architecture is monumentally fake 20th century neo-classic stuff (no doubt itself a preservation conundrum in time). This building is an honest expression of its time.

Right now, though, the MLK Library is certainly a challenge, like its New England sibling, Philip Johnson’s unlovely addition to the Boston Public Library, it’s expensive to maintain, too historic to tear down, too hard to adapt to another use. 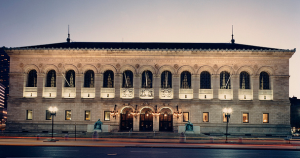 The companion building to the Johnson, the ornate and glorious McKim building, has had an overhaul that everybody’s pretty jazzed by: it reunited the architectural ideas of the library with its present-day users beautifully. At the MLK Library they were probably never together in the first place, and what exactly do you preserve?