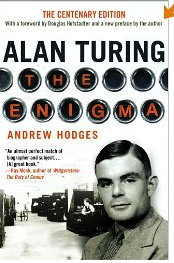 Why do some figures pass “the test of time,” while others flunk it? Is the judgment permanent? What about these figures for whom a small, but ardently industrious group of rescuers pop up? (Yes, Frida Kahlo, I’m talking about you.)

I’ve thought about this a lot, mostly in light of artists and composers. Sometimes it seems to me not so much an argument about eternal value, but feebly, just a clumsy, way to talk about aesthetics, society, and style. In essence, to make new arguments about what matters right now, but to clothe this in battles of the canon, preferably seasoned with large helpings of righteous indignation about past injustices.

Whatever the reason, we certainly spend a lot of cultural effort in these kinds of discussions. Is science immune to these gab fests? Alan Turing certainly has just come off a few laps with the test of time, besting her easily and wrapped in winner’s colors of a rainbow hue. A friend co-wrote a piece that pads comfortably through his mighty achievements, noting a few of the persuasions and arguments (Frank Kermode’s words about passing the “test”) that Turing brings up, and the many narratives he fits into: AI pioneer, war hero, rallying point for renouncing mi-treatment of gays in the 50’s Britain.

Still, why now? Is there anything beyond the convenience of the anniversary (a nice coincidence for Turing to have both birth and death dates in June, now gay pride month) and some vague feeling that we should do a better job of paying attention to technical innovators? Even my being a gay nerd, for whom he might be expected to be a hero, does not provide me a way to connect. He remains just a mysteriously brilliant man and sad case.